One of the things i’ve been working on during the past years is the concept of symmetry in music. So … what is symmetry when it comes to musical concepts ?

Generally speaking, we say that a musical material is symmetric when it is constructed on a division of the octave in equal parts. OK … let’s start from zero and see the meaning and implication of this statement, when it comes to scales.

A very important property of the human brain is the aptitude to identify two musical items played at different octaves as being the same thing, but in different registers. It seems so obvious to us that we never think about it, but it is actually very important for composers to be able to give some logic, construction and meaning to music.

The modern western music system is based on the division of the octave in 12 equal parts, called semitones: the smallest interval possible between 2 consecutive notes. Though, we have 12 notes at our disposal to build any musical material. A scale can then be considered as a subset of the 12 available notes. The complete set is called the chromatic scale.

There are 2 ways of defining a scale quality: by the intervals of each note with the root and by the succession of the intervals between each consecutive note. Using the first way, the major quality is defined by 1 2 3 4 5 6 7, representing the sequence of the intervals of each note of the scale with the root : unison, major 2nd, major 3rd, perfect 4th etc….Using the second way, the major quality can be defined by 2212221. Each number represents the number of semitones between a note and the previous one. (Both ways are useful and should be memorized).

Here the 3 basic scales used in western music in the key of C:

We will concentrate for a moment on the second way of defining a scale, which I call the relative definition. (Each note is defined relatively to the previous note, in opposite to the first way where each note is defined in relation to the root. I call it the absolute definition). We can see that for the three scales above, there is no repeating pattern inside the relative definition. We cannot extract a smaller pattern that we could repeat various times to obtain our scale.

Now let’s have a look at the Diminished Whole-Half scale:

Its relative definition is : 21212121. It’s an octotonic scale (that contains 8 notes). Here we can see that the scale is made of a smaller pattern of 2 notes: 21, that is repeated 4 times. That’s why we can talk about a whole-half (or 21 in our relative definition notation) scale to define an 8-note scale, we don’t have to precise that the name of the scale is whole-half-whole-half-whole-half-whole-half, and you know why ? Because when we repeat the 21 pattern four times, we get to the octave and we « close » the scale. Therefore, this scale is based on a division of the octave in four equal parts: It’s a symmetric scale !!

Time for a little bit of math … (nothing that’s gonna hurt you, promised)

An octave is made of 12 semitones. When we look at the relative definition of a scale, the sum of all numbers should always be equal to 12. (We could imagine a system based on scales that are bigger than the octave but it’s not the topic for now).

Here the material resulting from the division of the octave in equal parts:

One interesting property is that any of the note in each scale can be considered being the root, without changing the resulting quality of the scale. Try to play it on a piano, from the low register to the highest, and then back down; you will notice that your ear quickly loose the sensation of where the root is, because every note is separated from her neighbors by the same interval. Do you notice that a sort of musical blur starts to appear ? This is typical from symmetry in music !!

1.When we do a circular permutation to a scale pattern, we don’t change the total number of semitones of the pattern.

These 5 main symmetric scales are not the only symmetric scales possible, by far, but any symmetric scale in music comes from them. How does this work ?Let’s take the Symmetrical 3 scale. 3 is the number of semitones in the axis (a minor third). 3 can be decomposed in a sum of integers by 2+1. It means that a scale built by an alternance of whole tones and semitones is also symmetric, and has the same symmetry axis of 3. We know this scale well, it’s the Diminished Whole-Half scale. In our language, we will call it the Symmetrical 21 scale. The 21 sequence has one circular permutation: 12. It means that the Symmetrical 21 scale has one other mode: the Symmetrical 12 scale, known as the Half-Whole Diminished or Diminished Inverted Scale. You can see that this scale has 8 notes but only 2 modes. This is going to be characteristic of the all the symmetric scales.The consequence is that you cannot transpose the scale in the 12 keys and get 12 different scales. This scale has only 3 transpositions possible: in the keys of C,C# and D. The Eb Whole-Half Diminished scale contains the same notes as the C Whole-Half Diminished. It’s the reason why the symmetric scales are also called the modes of limited transposition. (Terminology introduced by french composer Olivier Messiaen).

Now that you understood how it works, I propose to find out all the possible symmetric scales and to classify them. The more logical way is to organize them by axis. With practice, you will realize that all the scale coming from the same axis have a « color » in common, due to the fact that they are based on the same division of the octave, and they share the same transposition properties. So, let’s start !

OK, this one is obvious. 1 cannot be decomposed in a sum of integers, so there is only one scale of axis 1. It’s the main scale Symmetrical 1, aka the Chromatic scale. It has only one mode and one transposition.

2 can be decomposed in a sum of integers in only one way: 1+1. But obviously, the Symmetrical 11 scale is identical to the Symmetrical 1 scale, the Chromatic scale.So the only real symmetric scale of axis 2 is the main Symmetrical 2 scale, aka the Whole-Tone scale. It has only one mode but two transpositions. It’s the first mode of Olivier Messiaen (M1).

The Symmetrical 111 has again no interest, it’s the Chromatic scale. As we just saw it, the Symmetrical 21 is the Whole-Half Diminished scale, it has one circular permutation or mode: the Symmetrical 12 scale, or Half-Whole Diminished. It has 3 transpositions. It’s the second mode of Olivier Messiaen (M2).

The Symmetrical 211 is the third mode of Olivier Messiaen (M3). It has 2 circular permutations or modes: Symmetrical 112 and Symmetrical 121 (also known as Tcherepnin Enneatonic) scales.

All these scales have 4 different transpositions. As you may have noticed, the number of possible transpositions is equal to the axis of the scale.

Ok… things are going to get funnier. 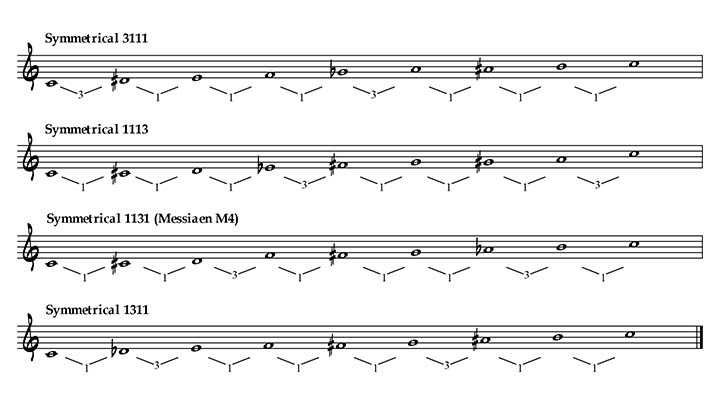 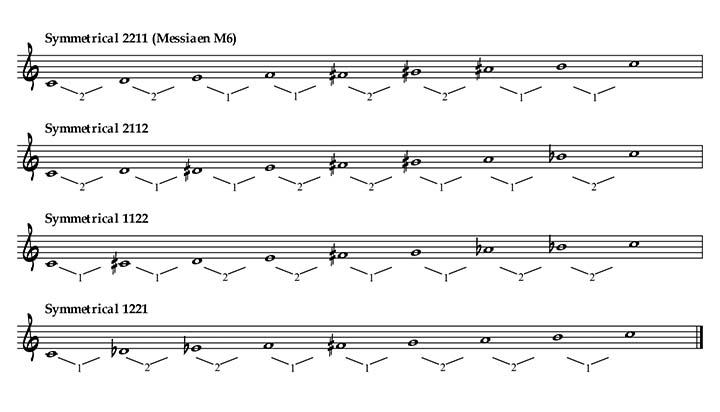 And … that’s it. These are all the existing symmetric scales in the well-tempered western music system. It was not that hard finally…

To use these scales in an improvisational/compositional context, we need to do a melodic analysis of each scale to see on what kind of chord the scale may work. I highly recommend to do this work by yourself.

1.There are no pentatonic or heptatonic scales is this list. 5 and 7 are prime numbers, so a scale containing 5 or 7 notes cannot be splited in various equal repetitive patterns.

2. The relative high number of symmetric scales in the western music system comes from the division of the octave in 12 semitones, 12 being divisible by 2,3,4 and 6 !!! Good for us that we didn’t divided the octave in 11 or 13 parts … no symmetry would have been possible in music.What’s next ?Now, the next step is to harmonize all these scales and find out the chords we can built up out of them. I will probably dedicate a post to this topic in the future…