The bVIm6 Chord: The Genius of Tom Jobim Part.1

Tom Jobim is surely one of my favorite composers, if not my favorite composer ever. I regularly have the opportunity to play some Jobim’s tune with jazz musicians or students, and there is a chord they are almost always getting trouble with, both in understanding its harmonic function and with his treatment in an improvisational context. This chord is the bVIm6 degree. It comes from the harmonic minor scale. You can check out the theory of this HERE.

Now let’s get into a detailed analisis of this strange chord that Jobim uses in several tunes. We’re gonna start with the bridge of his famous tune Dindi.

First, let’s have a look at the most official written source, the brazilian Tom Jobim songbook (From the Lumiar edition of Almir Chediak, known for having been checked out by the composers). Here what we find for the bridge of Dindi in this book:

The tune is in the key of C major, but the bridge goes to E minor and then D minor. During the E minor section, we have a Cm6, and during the D minor section, a Bbm6. These chords are both a bVIm6 degree in their respective key … the one we’re gonna talk about. Going from Im to bVIm is a modulation practice coming from the chromatic mediant relationships, used in classic music and film scoring. I will not get into details about this now (maybe in a future article) but I think it is not what we have here. Here the bVIm6 comes with a major sixth, giving him a quite different color from the triad. Let’s compare this bVIm6 to another chord that differs from it by only one note, the V7(b13) degree. Here examples of how these chords can both go to a Cm7:

We can clearly see that bVIm6 is a V7(b13) chord with a raised root. If we put back the root at the top of the voicing, we have a bVImMaj7(13), which could also be understood as a G7(b9,b13)/Ab. Of course, nobody wants to see that written out on a chart … guitar player would have an heart attack.

Under this new light, we can consider that this chord works here as an altered dominant. It also contains the tritone B-F (Cb-F enharmonically), which is the characteristical interval of the dominant function in the key of C. Going back to the chart from the Jobim songbook, we can also notice that the melody on the Cm6 chord is written with a D#, note an Eb … confirming its leading tone function in the key of Em, implying also a dominant function. Here some simple voicings for this version: 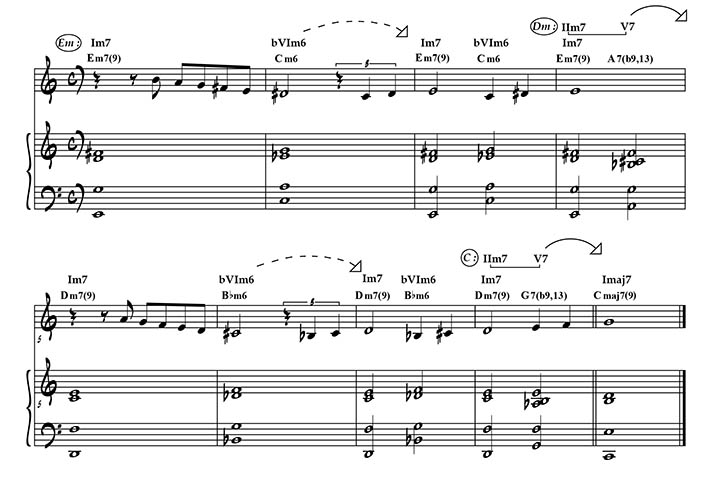 Now let’s listen to some versions of Dindi to see if we can get interesting information. The tune was written by Jobim for brazilian singer Sylvia Telles, who recorded the song for the first time in 1959. Here the bridge of this version, with simplified chord symbols and audio sample, in the key of Bb:

We don’t find any bVIm6 here, instead a beautiful dominant over tonic pedal function. So maybe this bVIm6 was not part of the composition in first place … but the dominant function of these bars is confirmed, even if we can notice that bar 3 & 7 have just a dominant over tonic chord, instead of a tonic-dominant movement, as in the original lead sheet. In 1965, Sylvia Telles recorded the song again, this time on her album with Edu Lobo. It goes like this:

Here we have a slightly more advanced harmony, but again, the dominant over tonic function is present. Notice the surprising modulation at the end of the bridge, using a F7(b13), dominant of Bb major, moving directly one half-step down to A major, the new key for the last A part. Yeah ! Singer Sylvia Telles did a third recording of the song the next year, in 1966, in duet with guitarist Rosinha de Valencia. Here we go:

We can see there are more chords here, with II-Vsus-V progressions instead of the dominant over tonic chords, a tritone sub (Db7 replacing G7) and again the modulation to the A major key. But no bVIm6 so far. In 1965, Joao Gilberto’s wife Astrud Gilberto, did record the song on her debut album The Astrud Gilberto Album. Here the bridge of this version, the song if in the key of A:

Here we go ! Am6 and Gm6 are the bVIm6 degree in the keys of C#m and Bm respectively … and history shows clearly that they replace dominant chords. The confirmation is given by the recording of Frank Sinatra and Tom Jobim himself in 1967:

Exactcly the same thing in the key of C major. Another interesting version of the song, by guitar genius Baden Powell, recorded in 1968, key of A:

Here various ideas are combined. The bVIm6 moves to the V7 before going to the Im …. and the dominant over tonic chord is also used as a variation. To finish with Dindi, the recording by the composer Tom Jobim, in 1980, on his album Brasilis … key of C:

Again, the bVIm6 chord … and in the second half of the phrase, in the key of Dm, he’s putting extensions to the bVIm6 chord, resulting in a beautiful string voicing.

Now let’s examine another tune, more briefly, the famous Girl from Ipanema. Here the A section of tune, as found in the Tom Jobim songbook:

It’s in the key of F major. But let listen to the original recording, in 1963, by Joao Gilberto & Stan Getz:

First of all, it’s in the key of Db major. And here the transcription of Joao Gilberto’s voicings on the guitar, with chord symbols. The top staff shows the melody and chord symbols of the songbook transposed to the key of Db: 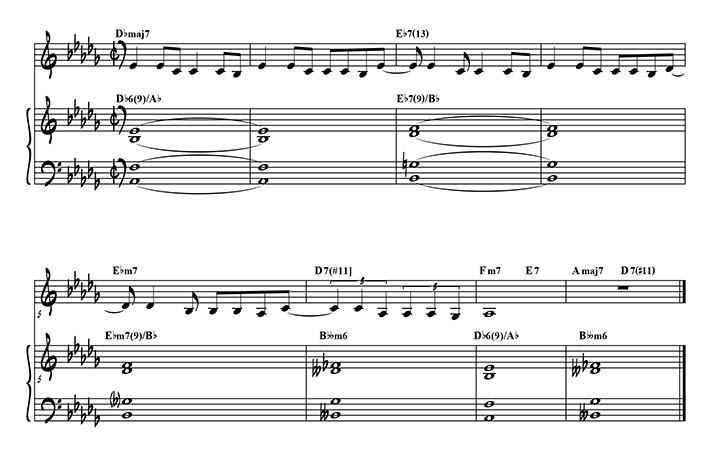 We can see how Joao Gilberto uses a Bbbm6 (bVIm6 in Db) to replace the D7 chord (subV7 in Db). It’s an harmonic signature of Joao’s playing … we find this voicing in a lot of his interpretations of the bossa nova classics.

Now we still have to discuss how to approach this chord in an improvisational context. I will for sure dedicate an article about the subject in the future.